Hapur was announced as a separate district as Panchsheel Nagar in 2011 and later the name was changed to Hapur District. Hapur is situated around 60 km from New Delhi and comes under the NCR region. The national highway 24 that connects the capital to Lucknow passes through Hapur. Hapur district is a part of Meerut division. Hapur district consists of three tehsils of Hapur, Garhmukteshwar and Dhaulana. The various areas in and around Hapur have been developed to provide a well-planned growth the National Capital, create various job prospects as well as attract commerce in Hapur. 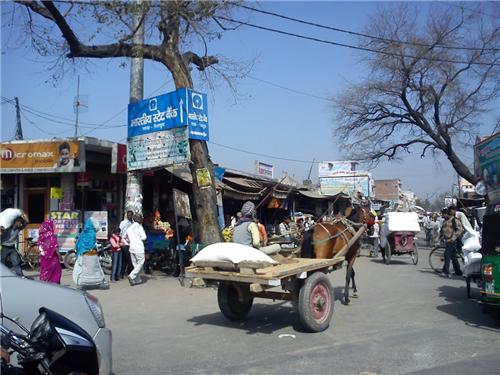 Pilkhuwa city is located around 12 km from the Hapur Center (Tehsil Chopla). The city is also known as the ‘textile city’ and is popular for ‘khadi’ products. Pilkhuwa is famous for small scale industries that manufacture Canvas, Khadi as well as printing work. Besides this, the place is famous for bed sheets and towels. It is only 45 Km from Delhi and comes in the NCR area.

Babugarh Chavani is a small town in the Hapur district as is located around 7 km away from Hapur. The place derives its name from EBS which stands for Equine Breeding Stud of the Indian Army.


Garhmukteshwar is a town that is situated on the National Highway 24 that joins New Delhi and Lucknow. It is the closest point from Delhi, where holy river Ganges flows. Garhmukteshwar is also popular for its bathing fair that is organized every year on the Full Moon day in Kartik month. Taking a dip in the holy river on this day is considered holy. Another fair is held here on the occasion of Dussehra as well.

Kharkhauda is approximately 18 km towards south of Hapur. It gives name to one of the railway station on the Meerut-Khurja line of the Northern Railway. The city is well connected by road from Meerut, Hapur and Mohiudeenpur. Regular bus service is available to Kharkhauda. It is the main source of education for the nearby villages. Kharkhauda is an ancient town and is well known for being the stables of the Rajas of Hastinapur. The place has derived its name from Kharak which means ‘a stall’. The town started flourishing during the time of Humayun.

Ajrara is an old and historic village located in Ghaziabad district of Uttar Pradesh. The village is situated on the bank of Kali Nadi which is about 13 km north of Hapur. The place derived its name from a yogi called Ajaipal. He built a temple (thakurdwara) here and named it Ajaipara. The major population in this village is of Muslims and is famous for a traditional table playing style, gharana-a-style. The style became famous after the name of the place and therefore, it is called Ajrara Gharana.

Dhaulana is one of the tehsil that is located in Hapur district. It comprises on about 91 villages. It lies on the state highway that joins Meerut-Hapur-Bulandshahr. It is connected with Pilkhuwa Railway Station and is one of the important towns near Hapur.


Gulaothi was earlier called as ‘Gulab Basi’ because of the large scale cultivation of roses in this area. Gulaothi has been an important learning centre of spiritualism. This small town is also the birthplace of many great Indian scholars who are now settled abroad. There are various sightseeing places in Gulaothi like the Jama Masjid and Madarsa Mumbahul Uloom. These were founded by Maulana Hazrat Qasim Nanautwi. There are many old palaces; the old bada mandir is one of the most popular. Gulaothi has the largest hedge funnel in the country and is also known for its various elaborate and beautiful hedge funnels.