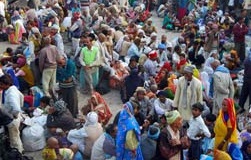 The population of Hapur was 211,983 according to the 2001 census. It has grown to 11,29,420 as per the 2011 census. The culture of Hapur is a unique blend of traditional and cosmopolitan qualities and is popular for many ancient temples. To check the population growth of Delhi, Hapur was developed and today Hapur is the home town for people from various regions.

Child Population in Hapur as per 2011 Census

The child population has always been a vital part of the census study and during the 2011 census, a lot of importance was given to the child population. The number of children between the age group of 0-6 years was 36,714 according to the census India report in 2011. There were 19,822 boys and 16,892 girls. The child forms about 13.97 % of total population of Hapur city.

Explore more about Geography of Hapur