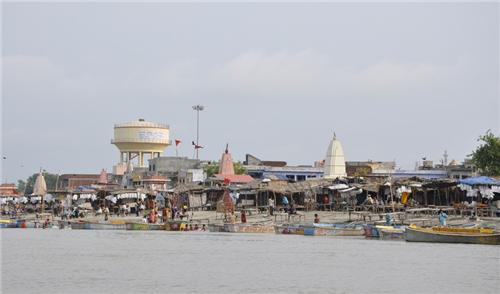 Garhmukteshwar derived its name from an ancient temple Mukteshwar Mahadev. The temple is dedicated to goddess Ganga. She is worshipped at this place in four temples; two of them are situated at the cliff and two below it. The water of Ganges River is considered very pious and sacred and it is believed that those who take a dip in this holy water, all their sins are washed away. There are eighty pillars at the banks of Ganges River which are known as sati pillars. They mark the spots where the Hindu widows became sati.

Every year a bathing fair is organized on the full-moon day in the month of kartika at Garhmukteshwar. The Garhmukteshwar bathing festival is a symbol of tradition, faith and trust and people from nearby and far off places come here to have a dip in the holy Ganga. Apart from this bathing fair, another bathing fair is organized in the month of Jyaistha on the occasion of Dusherra. During this fair also pilgrims come from all over India and take a dip in the holy water of Ganges River.

Another fair organized in Garhmukteshwar is Gadho-ka-Mela which is a kind of animal market where ass/horse/donkey are purchased as well as sold out. This fair is attended by residents of Hapur district and nearby places. Not only this, business man from all parts of the country and even the neighbouring countries such as Bangladesh and Pakistan also become a part of this animal fair.

Special arrangements are made during the Garh Ganga Fair time for the pilgrims so that they do not face any problem.