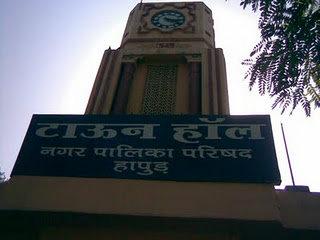 Hapur is an old and historic town which was declared as an independent district on 28 September 2011. It was earlier a part of Ghaziabad district. Hapur is a leading market for grain and jaggery and is famous for Papads (a large wafer). It is located around 64 km from Delhi.

Hapur derives its present name from erstwhile name of this place ‘Haripur’ which has a mythological connection to it. It was the resting place of Sri Krishna (the holy god of hindus also known as Hari) during his transit from Mathura to Hastinapur and vice versa. It was therefore christened as 'Hari' 'Pur' (place). According to the Jana-Shrutis, the founder of Hapur town was Raja Harishchandra. There is another theory of Lok-Shruti, which indicates that the town was founded by Hardatta (Daron Ke Sardar), the chieftain of Meerut and Bulandshar in 983 A.D. It is also said that the city got its name from the word ‘Hapar’ which means garden.

Hapur was small town of the British India that came under the Meerut Division of the United Provinces. It was granted by Sindhia to Perron who was his French General during the end of 18th century.

The Britishers used this place in a customary and conventional fashion for several years. During this period, land was cleared of the forest bushes and later distributed among the retired people. In 1805, Tehsildar of Hapur, Ibrehim Ali fought with Khan Pindari and successfully repulsed the attack. In 1857, Hapur was attacked by Validad Khan of Malagarh, however the jats of Bhadona repulsed the attack.

At that time, the town was surrounded by several fine groves and a wall surrounded the town from all the sides. The walls as well as ditch are no longer present, and only the names of five gates remained : Delhi, Garhmukteshwar, Sikandra, Meerut and Kothi. The infamous mughal emperor Aurangzeb got the Jama Masjid built in 1670.

The municipality of the town was established in 1872 and later the community services developed. The town got its electricity connection in 1932, following which, various developmental activities took place. People from the nearby places started coming to this place to carry out business and trade. One of the major reasons of unbalanced growth of this place is the influx of rural population in large numbers as well as lack of proper development.

During the movement of the India's struggle for freedom, people in huge numbers were involved from all the levels of the society. Hapur has noteworthy for its contribution towards the freedom struggle of the nation. Being a part of Meerut, many people took part in Swadeshi Movement of 1905 and Non Cooperation movement of 1920. Every year a fare is organized in remembrance of the martyrs who sacrificed their lives for the nation. The fare is locally popular as Shaheed Mela. To honor these brave martyrs, there is a Smarak at Attarpura Chowpla.